I recently completed a 10 day juice cleanse using my NutriBullet. I have been getting lots of questions from friends and family about this, so I decided to share some information about what I did here on TNL. First of all I would like to stress that I made this up and it worked well for me, but everyone is different. It would be a good idea to consult with a doctor before beginning a fast or cleanse of any kind.

So, you all know about my love affair with my NutriBullet from my past posts. You know who else is in love with her NutriBullet? Jully Black. I LOVE Jully Black, I think she is amazing. She is so talented and inspiring. So you can imagine how excited I was when she responded to ( and shared!) some  past posts and started to follow me on Twitter.

Then she replied to one of my NutriBullet tweets with this:

Record scratch stop. Happy dance freeze. There was no way I could do just smoothies for 3 days, never mind 15-30.

Fast forward many months and a co-worker recommended a documentary called Fat, Sick and Nearly Dead. This film is excellent. If you haven’t seen it, check it out. I promise it is not nearly as morbid and depressing as its title. In the doc, a man named Joe Cross embarks on a forty day juice fast which ultimately cures him of the health problems he had been having. After watching the film, a few things stuck with me. First of all, a healthcare professional talks about how your body and mind often get to take breaks, for example when you are asleep or on vacation. However, most people’s digestive system have never had a significant break. Joe Cross says that ten days is the minimum amount of time that the body needs to sort of reset itself and cleanse.

So, I decided to gear up for a ten day reset cleanse using my NutriBullet. This is different from the type of cleanse that the documentary depicted because I did not use a juicer. So it was really more of a smoothie cleanse than a juice cleanse. But i truly believe that using the NutriBullet rather than a juicer kept me from going nutso and feeling starving since I was consuming the fruits and vegetables in their entirety, fibre and all.

I looked at my calendar and chose ten days where I had no social commitments. I was also working ten days straight, which I thought would help. I think it would be harder to do this if I had too much free time on my hands.

The number one question I am getting is whether or not I lost weight. I don’t know. I didn’t weigh myself on purpose, as this wasn’t the goal of my cleanse. Plus any weight lost would likely come right back when eating regularly again anyway. I suffer from chronic allergies and headaches so I wanted to see if this made any difference.

So I’ve been asked for the recipes I used, but there really was no fine science to it. I started off by loading up on an array of ingredients that I often use to make smoothies with. 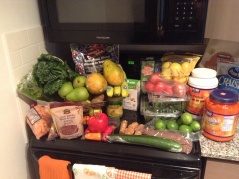 I just made sure to make all smoothies with both leafy greens and fruit, or just veggies in order to maximize my veggie intake. I also added nuts, cayenne pepper and vegan protein powders to some of my blasts. To vary the taste and keep things exciting, I added water, coconut water or different flavours of almond milk. For lunch or dinner I would blend veggies with vegetable stock and drink it warm. I tried to convince myself it was soup, but I really missed the seasoning! I did not eat any snacks at all and also planned to try and avoid drugs of any kind and caffeine for the ten days. I knew the drug part would be really difficult as I take allergy pills and Advil for my headaches frequently.

Pretty well, I think. I had headaches for the first two days of the cleanse, and none after that. I have also had none since the cleanse ended three days ago. That is a huge deal for me. I have not taken any Advil either. I had to use my allergy nasal spray (hawt!) twice during the cleanse and that’s it…another big deal if you know me. I ended up having about 3 NutriBlasts every day, one being my nasty NutriBlast soup.

The number one thing that I noticed during the cleanse though was a perceivable difference in my energy and sleep. I fell asleep quickly every night and slept straight through until morning, which I never do. I woke up every morning feeling refreshed, energized and ready to start my day. I am usually groggy and slow moving in the morning. At work, I found that I was more focused and productive, not hitting a brick wall as I often do in the afternoon.

On the cleanse I craved the foods that I loved and kept catching myself reaching for a snack or planning to have something for dinner, but I can honestly say that until day 9 and 10 I never felt hungry. As I mentioned before, I think this is because the NutriBullet makes a dense smoothie and uses all parts of the fruit and veggies. I anticipated being hungry and cranky, but it was very much the opposite. 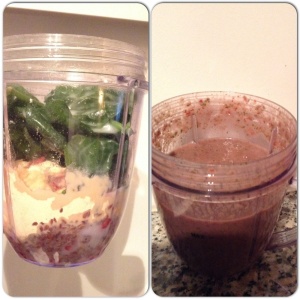 Here is an example of some of the NutriBlasts I made during my ten day cleanse:

I often started the day with a NutriBlast of berries, flax seeds, pea protein, goji berries spinach and almond milk. 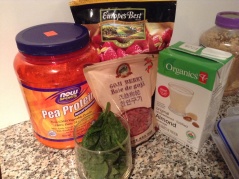 For “soup” I heated up a NutriBlast of whole tomatoes, garlic, celery, onion and carrots. 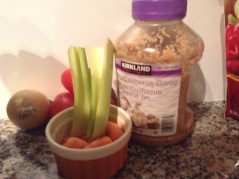 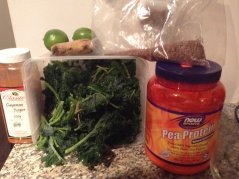 I made a yummy treat smoothie on day one.  I blasted almond butter, chocolate hemp protein, a banana, spinach, coconut almond milk and a spoon of almond butter. YUM!!! It was delicious, but I never had it after that because it was just too rich and heavy and I wasnt hungry enough. Imagine that! 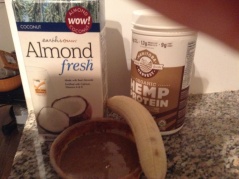 Another favourite of mine is Tim Horton’s Pumpkin Spice tea. I really missed green tea during my cleanse, but it contains caffeine. This pumpkin spice tea is a yummy caffeine free Rooibos. I think it is only around for a limited time, so I made sure to buy some for home. 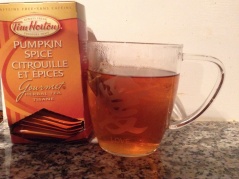 I definitely feel better for having completed this ten day cleanse. Aside from the physical benefits I mentioned, I also feel fantastic about the fact that I achieved a goal that seemed impossible for me and had the willpower to complete my plan with no cheats!

I really love reading about your ideas and experiences so if you have a NutriBlast recipe, or have done a juice/smoothie cleanse in the past please let me know all about it. 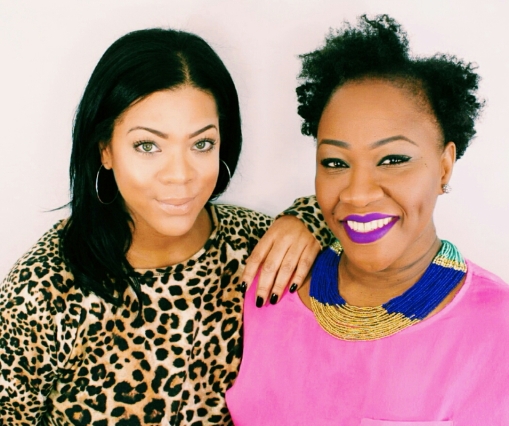